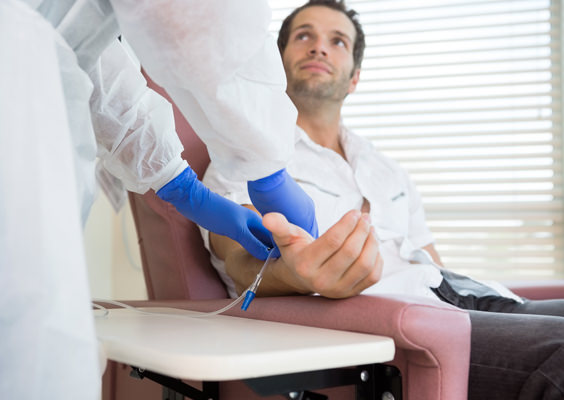 Get more oxygen into your blood, and it instantly destroys infections, bacteria, fungi, and viruses.

Oxygen can even destroy cancer cells without harming healthy cells.

In today’s world, getting oxygen to your cells is not as easy as it used to be. Even simple nutritional deficiencies like a lack of omega-3s can prevent oxygen from reaching your cells.

But ozone is controversial.

It attracts attention from the Feds because it WORKS. And anything that kills cancer naturally is going to bring heat from Big Pharma and Uncle Sam.

Here in the U.S., the FDA has been trying to crush ozone therapy for over 70 years – with the help of Big Pharma and the medical establishment. You see, oxygen is cheap, and it can’t be patented.

In the 1960s, Dr. Robert Atkins – the famous diet guru – lost his medical license after he went on a radio program and told the audience how he cured breast cancer with ozone therapy. After a national uproar, his license was reinstated, but only after he agreed to stop using ozone therapy.

While in office, the late-President Ronald Reagan had to plan a secret meeting in Germany to get ozone therapy for his cancer. He died over a decade later of pneumonia – not cancer – at age 93.1

Meanwhile, tens of thousands of doctors in Europe and Russia successfully use ozone therapy on millions of patients every day.

Ozone’s Power is All About the Extra Oxygen

Oxygen atoms can’t exist alone, so they like to hook up in pairs to form the breathable form of oxygen we all know as O2.

Add one more oxygen atom to O2 and you get ozone, or O3.

When ozone gets into your blood, that extra atom of oxygen breaks away and zaps the bad guys like viruses and cancer cells.

Some people call ozone “energized” or “activated” oxygen. That’s because it’s so ready to react with anything around it. It’s too unstable to gather from the air. So I use a special machine to make the O3 from medical-grade O2.

Then I draw a small amount of the patient’s blood. Next, I infuse the blood with medical-grade O3 mixed with O2. Finally, I slowly reintroduce the oxygen-rich blood back into the patient with an IV.

The activated oxygen releases its energy throughout the body. It improves circulation, stimulates stem cell production, and flushes out toxins.

For someone with cancer, ozone can lower inflammation and help remove free radicals. It can also destroy cancer cells on contact.

It works because healthy cells have biochemicals to safely neutralize ozone but cancer cells don’t.2,3,4,5

Just some of the successes energized oxygen include:

3 Ways to Use Ozone Right Now

You don’t need a doctor’s visit to get the benefits of ozone. If you want to harness the power of super-charged oxygen at home, there are several ways to do it.

Ozonated Water: Super-oxygenated water boosts your immune system, and eliminates microbes and toxins in your blood. It can also slow the spread of cancer by killing malignant cells.

In addition to drinking ozonated water, you can tap into its healing powers by swabbing it on cuts, rashes, stings, and sunburns.

You can make your own ozone-infused drinking water with a machine called a “cold corona-discharge ozone generator.” And be sure you drink it before the ozone breaks down into regular oxygen. Ozonated water is also available online.

Ozonated Olive Oil Paste: The oxygen-infused salve is one of my favorite natural healers.

You can rub it on cuts, burns, sores, boils, sunburn, infections, dermatitis, fungal infections and insect bites and stings. It disinfects, sterilizes and reduces swelling and redness. And it promotes cell growth while reducing scarring.

You can buy it online, but make sure it comes from pure, cold-pressed, virgin olive oil.

Ozonated Magnesium: This combo is one of the best ways to ease constipation, and clean out a clogged colon. Remember ozone has an extra atom of oxygen? In this case, that extra oxygen dissolves the build-up of impacted material and kills off bad bacteria. The results is a relaxed, free-flowing gut. Look for formulas online.

Stay tuned! I’ll be talking to you more about oxygen, its health benefits, and disease-fighting potential as we get closer to the grand opening of my Palm Beach Institute for Anti-Aging Medicine on October 9.