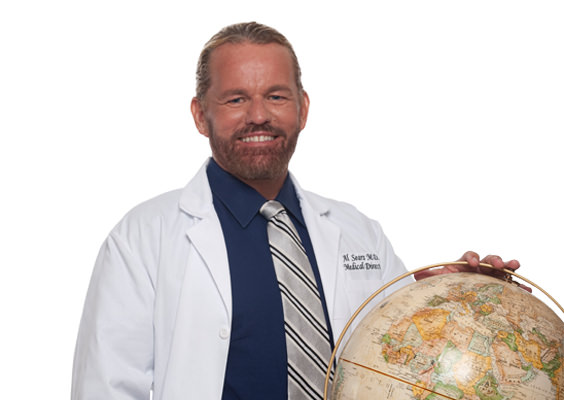 Since I started practicing “telemedicine” at my Sears Institute for Anti-Aging Medicine — the response has been just incredible.

Telemedicine is the use of medical information exchanged from one site to another via electronic communications to improve a patient’s health status.

You can now have private consultations with me or my clinical team from the comfort of your own home — through a live video stream.

Tele-patients use tele-health service to receive advice or treatment from another location.

I’m delighted for all my new patients that have already registered to become “tele-patients” from across North America and around the world — some from as far afield as Australia, the U.K. and Austria.

For instance, one of my tele-patients has been using my new service via her iPad from the most unexpected location yet — a bed in a West Texas hospital.

JB, a fit woman in her mid-50s, told me in her “e-visit” that she’d gone to the ER after experiencing sudden shortness of breath during a daily exercise routine.

Tests revealed she was suffering from a pulmonary embolism, which struck her after a blood clot became lodged in an artery in her lung and blocked the flow of blood.

But JB was concerned about the course of treatment the hospital had put her on.

Typical of the “medical establishment,” they made no effort to discover the root cause of her embolism, and immediately put her on the blood-thinning drug Coumadin, also known as warfarin.

Studies prove that warfarin dramatically increases your risk of stroke.i It also blocks vitamin K2, which is a potent heart and lung defender.

In the well-known Rotterdam Heart Study, Dutch researchers followed 4,800 participants over the course of seven years.ii They discovered that those with the highest levels of vitamin K2 had a 57% reduced death rate from heart disease than those who had the lowest levels. What’s more, this same study found that getting enough K2 in your diet can reduce severe aortic calcification by 52% and overall mortality by 26%.

JB didn’t want to take these life-threatening risks, so she contacted my Sears Institute for Anti-Aging Medicine via my new telemedicine service from her Texas hospital bed.

My clinical team told her there was no chance the doctors there would follow my “alternative” advice, so further consultations will be arranged with her as soon as she leaves the hospital.

Mainstream doctors have a bad habit of pushing Big Pharma pills at symptoms and almost never treating the root causes of medical conditions.
The root cause of JB’s pulmonary embolism is most likely poor circulation and blood pressure issues — but I’ll investigate further during our follow-up telemedicine e-visit.

One of the best ways to start working with poor circulation and blood pressure concerns is high doses of omega 3-rich krill oil.

Omega-3 fatty acids reduce inflammation throughout the body, and are especially important for repairing damage to your blood vessels.

B vitamins also play a critical role in heart health by reducing the amino acid homocysteine, which contributes to heart attack, stroke and pulmonary embolism.

CoQ10 and PQQ also fight inflammation and they give your heart cells a real energy boost.

That’s the beauty of telemedicine. You can be treated anywhere in the world. If you’ve used videoconferencing at work or used Skype to chat with your friends or grandkids, then you know how easy video chat can be.

Telemedicine allows me to bring my cutting-edge anti-aging therapies to anyone, anywhere — using our safe, secure platform.

With telemedicine, you have access to the same anti-aging and integrative medicine services that all of my clinic patients do — including natural, breakthrough treatments for cancer, heart disease, diabetes and Alzheimer’s, arthritis and male potency.

What was once hundreds (even thousands) of miles away has been brought right to your home.

Together, we can create a comprehensive wellness plan that’s customized just for you — no matter where you are.