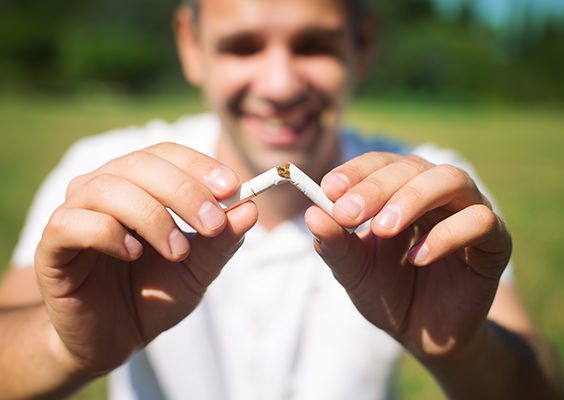 Quitting smoking is one of the best things you can do for your health. But I’m concerned that people trying to quit — and you may be one of them — are using electronic cigarettes. First of all, it won’t work. E-cigarettes do their job by heating liquid nicotine, and turning it into a vapor you inhale.

Nicotine is a nitrogen-containing chemical which is made of several types of plants, including the tobacco plant.

But nicotine is one of the most addictive substances out there — no matter where you’re getting it from.

I get it. Quitting smoking is hard. And it’s easy to be hard on yourself when you don’t succeed. But the key to breaking addiction is easier than you think.

In today’s article, I’m going to show you how you can safely eliminate cravings and fight addiction by supporting your body’s natural healing processes.

You see, we live in a world that’s constantly being bombarded by industrial pollutants and environmental toxins. They’re in the air we breathe, the food we eat and the water we drink. They’re even in the consumer products we touch.

If you want to flush out unwelcome toxins, you need a healthy liver to make it happen.

Your liver is your body’s natural detoxifier. But because our daily environment is already filled with unnatural toxins, your liver is overloaded. So instead of processing the toxins and removing them from your system, your body begins to store them.

Your liver’s inability to detox efficiently means that nicotine and other harmful chemicals can remain in your system for years. That’s why the cravings you feel and the urge to have another cigarette can persist for months, sometimes years.

But e-cigs, with their nicotine vapor, are not the answer. And it’s not just nicotine that’s the problem. E-cigs can also cause chronic inflammation — which is at the root of every modern disease.

Researchers at the University of California San Diego exposed mice to e-cig vapors for one hour, five days a week for four weeks. And the results revealed that the exposed mice had 10% higher inflammation in their blood and airways than unexposed mice, and they were more susceptible to pneumonia — and that’s just after four weeksi.

You’re probably wondering what makes e-cigs so dangerous. Since they’re relatively new researchers are unsure of specifics. But, the aerosol that creates the vapor contains nicotine, carcinogens, toxic particles, and heavy metals that are all known to be harmful to your health.

Most people think they have to replace cigarettes with something else to fight addiction. Many of my patients use nicotine gum, patches and lozenges promoted by doctors and Big Pharma to try to quit smoking. But these only help with withdrawal symptoms.

Smokers who use them are just as likely to relapse after six months as those who go cold turkey.iii

If you want to quit smoking for good, you have to eliminate the toxic build up in your tissue that’s causing your cravings in the first place.

That’s why I recommend detox to my patients at the Sears Institute for Anti-Aging Medicine. It’s had great success, and it also repairs and restores your body by removing years of toxic buildup in your liver. Tobacco and the thin paper it’s rolled in contain at least 60 carcinogens.

I’ve found the most effective approach combines both oral chelation and IV chelation.

IV chelation, an intravenous detoxifier, is the quickest way to rid your body of harmful chemicals.

IV chelation helps your body get rid of the nicotine in your system that causes cravings. It also eliminates the heavy metals you’ve accumulated from years of smoke inhalation. I use calcium disodium EDTA for IV chelation directly into your bloodstream. In no time, the toxins are “grabbed” by the EDTA and taken out.

And for oral chelation for nicotine and cigarette-related heavy metals, I recommend: