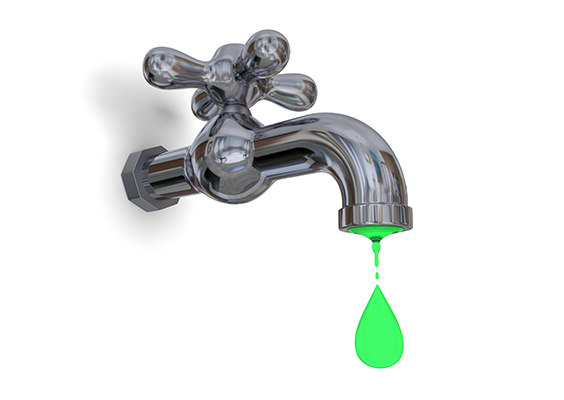 I’ve been watching the crisis in Flint, Michigan, with increasing alarm. The city’s old pipes and fixtures are still leaching lead, poisoning water users and creating a state of emergency. More than 100,000 people are still without safe tap water.  In some cases, the water was found to contain such high levels of lead it’s been classified as “toxic waste.”

What is lead poisoning?

As you may know, lead is one of the most toxic heavy metals out there. People in Flint can’t drink, cook bathe or brush their teeth with the city’s water without the risk of being poisoned.

And while you may have been told Flint is an extreme case, it’s hardly the only one. Lead levels in water have been deemed “unsafe” in other parts of Michigan, as well as parts of Ohio, Mississippi, New Jersey and South Carolina and California — to name just a few.

But the bigger problem is that lead has been quietly poisoning you for years — in every state and in almost every country in the world — and the danger isn’t just coming from your municipal water supply.

Here at the Sears Institute for Anti-Aging Medicine, I’ve seen how this kind of toxic pollution can take its toll on your health.

In a minute, I’m going to tell you about a few natural, safe and sure-fire ways to remove lead from your body.

What Are the Sources and Effects of Lead Poisoning

But first, let’s take a closer look at the scale of the lead poisoning threat.

The fact is that over the last 100 years, this highly toxic heavy metal has pervaded almost every aspect of your life.

At one time, lead was an ingredient in numerous household products, including lead-based paints manufactured before 1978. And, in 1922, General Motors developed a lead-based gasoline additive that prevented auto “knocking.” This alone pumped some 250,000-plus tons of lead into American air every year.

And although it’s been almost 40 years since lead paint was banned in the U.S. and lead is no longer used in fuel for automobiles, the problem in America remains at epidemic levels.

You see, the heavy metal is potential hazard in any home that was built before 1978, where the old lead paint remains hidden behind successive layers of new paint or wallpaper.

So if your home has been renovated, or even if you’ve had windows replaced, it often stirs up old lead dust that can be ingested or inhaled.

Children are especially vulnerable because they absorb lead more readily than adults and are more likely to put dusty hands in their mouths. And they often find lead paint chips tempting because of its sugary taste. In fact, ancient Romans had used lead powder to sweeten wine.

Soil can also be a source of lead poisoning, along with household dust from hidden, deteriorating lead paint as well as imported toys.

Sadly, the devastating effects of lead poisoning on young children and grandchildren include irreversible damage to the brain and nervous system, behavioral and learning problems, and hearing loss.

But lead also causes damage in adults, and is linked to high blood pressure, kidney and liver damage, and diabetes.

Lead builds up gradually in your teeth and bones over time. But it doesn’t always make you sick right away. It can take years before the levels get high enough for you to notice something’s wrong.  1 Studies also show that lead exposure can dramatically increase your risk of developing Alzheimer’s in later years.2 Exposure also increases your risk for cancer, especially of the liver, kidneys, lungs and brain.3

There’s no amount of lead that’s “safe” for your body. The problem is that mainstream often doesn’t connect the symptoms with lead poisoning.4

How To Diagnose and Best Lead Poisoning Treatment

A blood test is the only way to diagnose lead poisoning. Here at the Sears Institute for Anti-Aging Medicine, we test patients regularly for heavy metal toxicity.

And patients are always shocked by the results.

The best way to detoxify your body is with chelation. I recommend a combination of oral chelation and IV chelation.

At my clinic, I use calcium disodium EDTA for IV chelation directly into your bloodstream. The EDTA surrounds and grabs hold of metal toxins such as mercury, lead and arsenic. It carries them out of your body through your kidneys.

And for oral chelation, I recommend a program of three purifying nutrients: Cilantro also removes heavy metals from your body. About a teaspoon a day with your food will help bring your lead levels down.