It was pouring rain. I could barely see as I drove up the winding mountains. But I would not be deterred from my mission.

I was on my way to finally meet Jamaica’s last living Maroon healer, Ivey Harris. I finally arrived at her secluded mountain home and she met me with open arms… and an umbrella.

After the rain let up, she showed me around her home. Her yard is like an all-natural pharmacy. And she’s a walking herbal encyclopedia.

One of my favorites was a Jamaican vine with weird-looking warty green fruit. Most people in the U.S. would call it a weed.

Today, I grow it in my backyard here in South Florida. 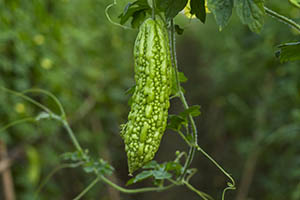 I grow cerasee in my backyard. I use the leaves to make a detox tea for my patients.

The plant I’m talking about is called cerasee (Momordica charantia). And for more than 700 years traditional healers have used this herb as powerful medicine.

Cerasee is also called bitter melon, bitter gourd or bitter cucumber. The plant produces gourds that look like fat, bumpy cucumbers. They change color to a yellow-orange when they’re ripe and ready for harvest.

You see, your body can’t handle a lot of carbs. Every time you eat a carb, your pancreas has to pump out insulin to push the sugars from these cheap foods into your cells to make energy.

With a carb-loaded diet your body produces TOO MUCH insulin. It has led to the modern pandemic I’ve named Syndrome Zero.

With Syndrome Zero insulin becomes less effective at pushing glucose into your cells. You end up with high blood sugar. Then you get pre-diabetes and even full-blown type 2 diabetes.

More than 100 scientific studies prove cerasee’s value in treating blood sugar problems. Compounds in cerasee help regulate your body’s carbohydrate metabolism. This prevents the spikes and drops in glucose levels that can be so dangerous to diabetic patients.

One study showed cerasee had positive effects on the serum glucose levels of those taking it, following both fasting and eating.2 And two studies show cerasee plays a key role in helping to balance insulin in your body.3,4

In fact, one study on 25 diabetic patients found that cerasee is more effective than Big Pharma’s blockbuster diabetes drug Avandia.5

Cerasee is called the most bitter among all fruits and vegetables. But don’t let that stop you…

I like to use cerasee in my cooking. I cut the green fruit open lengthwise without peeling. Then I remove the seeds and the unripe fruit from inside and chop it like a green pepper. I boil the pieces until tender, and add them to my stir-fry. You can also add a little bit to soups or beans to give a slightly bitter flavor.

Or you can find cerasee extract in capsule form. Take 500 to 1000 mg three times a day after meals.

I also use the young cerasee leaves to make a detoxifying tea. Here’s how…

But don’t go overboard with drinking this tea…

Some people are allergic to cerasee. Too much can cause vomiting and diarrhea. And be careful if you already have low blood sugar. Bitter melon could make your blood sugar drop too low. Also avoid this herb if you are pregnant.