I don’t know if it’s the same with you, but one of my favorite things to do when I travel is eat.

I love to taste all the local cuisine. That’s why, of all the adventures I had on the paradise island of Bali, some of my favorite memories are of mealtimes.

I remember having dinner one night at the home of my friends, Westi and Lelir. They are Balians — or traditional healers. As Westi and I chatted around the dinner table, Lelir came over with a dish that was one of the most fragrant meals I’ve ever come across.

But more importantly, Westi told me its main ingredient was one of Bali’s most potent cancer cures.

It’s not surprising that Bali’s cancer rate is almost 75% less than in America.1

Curcumin is a phytochemical with astonishing health properties — but its ability to fight cancer is nothing short of extraordinary.

You may even already have some in your kitchen cupboard, because it’s the main component of turmeric. It’s been used daily in Asia for at least 6,000 years as a medicine, beauty aid, cooking spice, dye and much more.

I’ve recommended turmeric — as both a powerful medicinal herb and a cooking ingredient — since my first trip to Bali more than a decade ago.

In the wild, turmeric is a tall, leafy plant — but its medicinal powers are found in its knobby red root which contains curcumin.

The ancient healers of Ayurvedic and Traditional Chinese Medicine didn’t understand why turmeric was so powerful — they just knew it worked. Now, modern medical research is slowly catching up and proving them right.

In fact, curcumin is now known to target 10 separate factors that can lead to cancer. You’d have a good shot at preventing cancer by just eliminating one factor… by eliminating 10 of them — you’re providing yourself with significant anticancer protection.

This is what Lelir, a fifth generation Balian healer, served us that night at dinner in the form of a dish called Nasi kuning, or Balinese Yellow Rice, cooked in turmeric and coconut milk.

Studies have shown that curcumin also:3

More studies show that curcumin strikes at multiple targets in prostate cancer, interfering with the spread of cancer cells and regulating inflammatory responses through NF-kB, the master regulator.4,5

Curcumin has also been shown to suppress colon cancer when combined with other polyphenols, such as resveratrol.6 And the combination of curcumin with green tea extracts has prevented experimentally induced colon cancer in animal studies.7

Other studies have shown the power of curcumin against blood cancers , brain cancer, pancreatic cancer, lung cancer and bladder cancer.

I recommend curcumin to all my patients — as both a cancer preventer and treatment.

Not only does curcumin contain powerful cancer-fighting compounds, it’s also loaded with antioxidants. These neutralize and remove dangerous free radicals from your body. And curcumin is great at reducing inflammation, the main root cause of cancer in the first place..

It makes great additions to stir-fry dishes and stews. I add turmeric in soups, cooked vegetables, deviled eggs and salad dressings. I also use it in scrambled eggs and marinades.

Try throwing half a teaspoon of each into your pan when you’re sautéing vegetables to give them a nice little kick… or add them into a smoothie.

But one of my favorite ways of enjoying turmeric this time of year is by making Golden Milk. 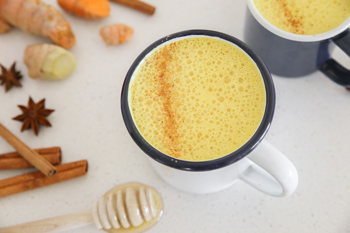 One of my favorite beverages this time of year is a hot drink called Golden Milk that blends coconut milk with turmeric.

This is a modern version of an ancient Indian beverage called haldi doodh. The classic drink is nothing more than powdered turmeric dissolved in hot milk. This updated version adds a few extra ingredients that kick up the health benefits a notch. They also add incredible flavor.

Of course, turmeric is also available as a supplement. I recommend a curcumin supplement that contains piperine, a black pepper extract that supercharges curcumin’s absorbency. Optimal doses have not yet been established for cancer treatment. Clinical trials have used up to 8,000 mg per day. I recommend dosages of 1,000 mg to my patients.