Air pollution is a 21st century problem. It’s not something our ancestors had to worry about.

I’ve written to you for years about the dangerous levels of pollution in today’s modern, toxic world.

But a new study I just read stunned me. Because it suggests that the air we breathe is making us fat.

Researchers at the University of California followed more than 2,300 children from birth to age 10. They found those who lived in areas with the most air pollution were on average at least two pounds heavier than children who breathed clean air.1

This backs up earlier research I looked at…

In that study, a Duke University professor placed two groups of rats in separate chambers. One group was exposed to Beijing’s super toxic air. The second group breathed filtered air.

But after 19 days, the rats exposed to the air pollution were 18% fatter!

To make matters worse, their lungs were 25% heavier and their livers weighed 16% more — a clear sign of inflammation.2

And a Swedish study measuring human fat mass found that people with the most pollutants in their blood were 10.6 pounds fatter than those with less pollution. That’s like carrying around a bowling ball or a gallon of paint!3

Persistent organic pollutants (POPs) are non-biodegradable compounds that stay in the atmosphere forever. They’re everywhere, and you can’t escape them. Even if you choose to live on a mountaintop or a deserted island, wind and water currents would guarantee that these pollutants soon found their way to you.

Some of the nastiest POPs include:

These pollutants settle deep in your skin and organs, changing the way your body and your metabolism function. And metabolic dysfunction leads to obesity.

These environmental toxins scramble your hormone signals. This tricks your fat cells into storing more fat. Your pancreas starts to secrete too much insulin. Over time, high insulin levels lead to weight gain and type 2 diabetes.

Fortunately, there are ways you can protect your body from the modern toxins that surround you.

I recommend you detoxify to get the poison out of your body. After doing so, you’ll have more energy, a stronger immune system and fewer aches and pains. You will also be able to burn fat more efficiently.

The best way to detox is with chelation. I recommend both oral chelation and IV chelation.

Here at the Sears Institute for Anti-Aging Medicine I detox patients with IV chelation. I inject calcium disodium EDTA directly in the bloodstream. The EDTA grabs hold of toxins, BPAs and metal toxins like mercury, lead and arsenic. It carries them out of the body through the kidneys.

If you’re interested in IV chelation at my clinic, please call 561-784-7852. My staff is happy to answer any questions you have.

Detox at Home with My Green Drink Recipe

For oral chelation, I recommend a detoxifying drink that’s easy to make at home. I’ve included the recipe below. It combines powerful, natural detoxifiers — lemon, cilantro and dandelion greens — that help your body eliminate toxins. 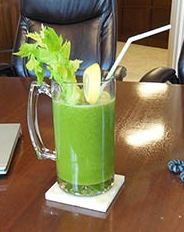 I try to drink this detoxing green smoothie at least once a week.