At the Sears Institute for Anti-Aging Medicine, my team and I are conducting a clinical trial that focuses on ramping up your immune system using a safe, drug-free alternative to Big Pharma’s injections. 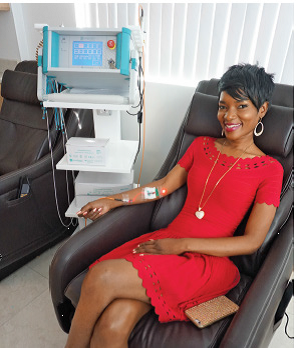 My wife Barbara uses IV laser therapy.
It ramps up your immune system – and provides a quick and painless energy boost.

I’m talking about beaming low-level laser light directly into your bloodstream to trigger your body’s own healing mechanisms. More on our research study in a moment…

IV laser therapy uses soft, low-power lasers. They have nothing to do with surgical lasers, which are used to cut, cauterize and burn out diseased tissue. Instead of destroying tissues and cells, soft lasers repair them.

A few of the conditions that have been researched and successfully treated with IV laser therapy include:

Let me tell you about the trial we’re doing in the clinic.

We have a group of 14 volunteers who are receiving IV laser therapy two times a week, for six weeks. Before the start of the study, we drew blood to get a baseline of each patient’s T lymphocyte cells (CD4) and cytotoxic T cells (CD8).

Your CD4 cells lead your body’s attack against infections. CD8 cells seek out and destroy cancer cells, viruses and cells that are damaged in other ways.

In a few weeks, when the study is concluded, we’ll draw blood again and compare the before and after. Stay tuned for those results!

Studies show that soft laser light increases the number of defender white cells in your immune system. Your interleukins, interferons, macrophages, and lymphocyte B and T cells all get a boost.1,2

IV laser treatments can also regenerate your lymphatic system and increase lymph circulation, your body’s natural detoxifier and a vital part of your immune system.3

And at the same time, IV laser therapy triggers another biological reaction that stimulates dozens of systemic healing effects. It’s been shown to:4

It does this by increasing nitric oxide in the body.

Although nitric oxide is primarily thought of as a blood flow enhancer to improve your sex life, it’s also a powerful weapon in your immune system’s arsenal.

The high amounts of nitric oxide produced by these macrophages are toxic to the viral pathogen. Not only does this stop the viruses from reproducing, it actually destroys them.

We Are Taking Every Precaution To Keep You Safe

At the Sears Clinic, we are doing everything we can to ensure your safety. Of course, we’ve always followed universal precautions to protect our patients.