Just like other parts of your body, your bones can get fat.
And fat bones lead to osteoporosis.

But a recent study from the University of North Carolina School of Medicine discovered when you reduce bone fat, your bones quickly rebuild themselves.1

Of course, you know I’m not talking about eliminating fat from your diet. I’m talking about getting back to the kind of daily activity that led our ancient ancestors to have a bone mass that was 20% greater than what we have today.

You see, with the right kind of exertion – the kind I developed for my PACE program – you can make bone fat vanish. More on that in a moment. First, let’s find out what “fat bones” really mean.

In a process called remodeling, old bone breaks down so new bone can take its place. This repairs damage and prevents bones from becoming brittle.

At the center of all this activity is your marrow, the spongy tissue inside your bones. Marrow coordinates the formation of bone and cartilage while also producing blood and immune cells.

And while bone marrow is a rich source of nutrients that allowed our ancient ancestors to evolve into the modern humans we are today, it also produces fat that can lead to brittle bones.

Scientists used to think that marrow fat was a kind of fat reserve not used to burn energy during exercise. But the researchers at UNC proved them wrong.

They discovered for the first time that vigorous exercise actually makes fat cells “vanish” from bone marrow and reverses osteoporosis within just a matter of weeks.

In an animal experiment, researchers fed one group of mice a diet intended to make them obese. The other group ate normally. After four months, half the mice in each group were given a running wheel that they used often. Then the research team looked at the marrow fat and bone density of the mice that were allowed to exercise.

As expected, the obese mice had more – and larger – fat cells in their marrow. And their bones had already become weaker and significantly less dense.

But here’s what really surprised researchers. After exercising for six weeks, both obese and lean mice showed a massive reduction in both the size and the amount of fat cells in their bone marrow.

In fact, the amount of marrow fat in the exercising obese mice dropped by more than half. And while exercise improved bone thickness and density in both groups, the improvement was particularly pronounced in obese mice.

Use Fat To Build Stronger Bones

So, it’s true that fat deposits in your marrow lead to weak, osteoporotic bones.
But, it’s also true that an evolutionary-based exercise program like PACE burns this fat for fuel. The result is stronger bones.

You see, you evolved to sprint, leap, lunge, stretch, jump, twist, and turn. That’s why the bones of your ancestors grew stronger with their daily challenges – even as they aged.

My PACE exercise program replicates these ancient natural movements. PACE is designed to return your body to its native state. PACE incrementally challenges your body with natural weight-bearing exercise to quickly increase your bone strength and help prevent fractures.

The beauty of PACE is that it only takes 12 minutes a day. 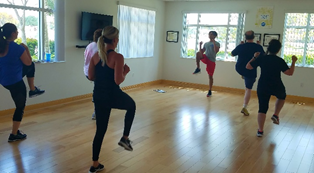 But most importantly, you can do PACE no matter what your current level of fitness is. Whether you’re out of shape, obese, or used to working out daily, you will benefit from this program.

The philosophy behind my PACE principle is to shorten the duration of your exertion and increase the exertion. PACE stands for Progressively Accelerating Cardiopulmonary Exertion, and the concept is pretty simple: short, progressively accelerated bursts of intense exercise followed by rest.

It doesn’t matter what your age or physical condition is. You can choose any exercise that makes you stop and pant for breath. It could be as simple as going up and down the stairs, biking, walking, or swimming. The most important thing is to increase your challenge gradually over time.

For specific PACE exercises, check out my YouTube channel. I have more than 30 different exercises and a complete workout to help you get started.