While I see signs of dementia and Alzheimer’s every day at my clinic, I’m also fortunate enough to see — and prescribe — the latest cutting-edge therapies that prevent and even reverse this devastating memory-stealing disease.

And one of the most exciting technologies I’ve brought to the Sears Institute for Anti-Aging Medicine is Intracranial Laser Light Therapy. Here’s how it works… 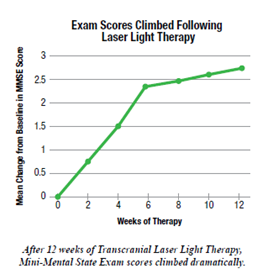 And when the mice recalled a memory, the neuron was marked with red dye.1

A week later they tested the mice. The healthy mice remembered the scent and froze, fearing the shock. The neuron with the memory was marked with both yellow and red dye.

But the Alzheimer’s mice only remembered half of the time. Instead of remembering the information in the yellow neuron, they were bringing up a different neuron — a different memory marked in red.

Then the researchers gave the mice a little help… They stimulated the correct yellow neuron with laser light. Lo and behold, the Alzheimer’s mice could now recall their “lost” memory!

In other words, zapping the correct neuron brought their memory back.

In a second, recently published study, researchers tested laser light therapy on a small group of patients with mild to moderately severe dementia or possible Alzheimer’s. Patients were assessed with both the Mini-Mental State Examination (MMSE) and the Alzheimer’s Disease Assessment Scale (ADAS-cog). These are the two most widely used exams to evaluate cognitive impairment.

For 12 weeks, participants were treated with Intracranial Laser Light Therapy. They were then assessed again using the same cognitive exams. The results were dramatic. Patients who had increased function, better sleep, fewer angry outbursts, fewer episodes of anxiety, and wandering reported post-PBM.

Without any negative side effects.

This is amazing research. It means Alzheimer’s is not a disease that destroys memories. It’s more like a malfunction. It’s kind of a short circuit in your brain’s ability to retrieve memories. Your precious memories are not gone at all.

If you’re interested in helping to restore missing memories using Intracranial Laser Light therapy, please call the Sears Institute for Anti-Aging Medicine at 561-784-7852. My friendly staff will be happy to arrange an appointment.

For decades, I’ve been helping my patients prevent and even reverse memory loss — without poking around in their brains. You can rediscover the clear thinking and memory agility of your youth.